The merciless aerial battles taking place along the Western Front at the start of World War I were more than an ocean away, but many a young American dreamed of getting in on the action. Hundreds of them traveled to Britain or Canada, where they learned the art of combat flying with the Royal Flying Corps and the Royal Naval Air Service (the two organizations would merge into the Royal Air Force in 1918). 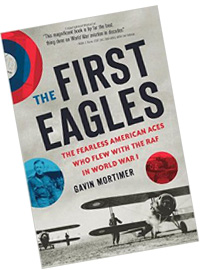 Timed for this year’s World War I centenary, Gavin Mortimer’s new book The First Eagles: The Fearless American Aces Who Flew with the RAF in World War I brings his subjects to life by drawing from squadron diaries and from the American pilots’ letters and journals.

According to Mortimer, many of the Yanks happily took up the ways of their British hosts. “They bought English boots and leather belts from the officers’ store in Oxford, and some took to wearing British tunics with lapel collars instead of the U.S. Army-issue stand-up collars,” he writes. “They were also issued with Royal Flying Corps caps bordered with the white cadet band, and they adhered to the behavior expected of a British officer.”

In addition to profiles of the American pilots, The First Eagles includes 109 black-and-white archival photographs.

Larry Callahan was a tall, laid-back, 23-year-old from Kentucky who had cut short a career in finance to serve his country. A gifted ragtime pianist, he had a passion for liquor, women, and cards. His talents extended to the air. He and other American pilots trained with the Royal Flying Corps in England before being assigned to Allied airbases in France. As a fighter pilot with the 85th Squadron and the 148th Aero, he became an ace.